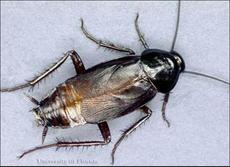 Often, this oriental cockroach is found feeding on garbage, sewage, or decaying organic matter and will eat almost anything although it prefers a diet high in starch.The origin of the oriental cockroach is uncertain, but it is thought to be from Africa or south Russia. It is a major household pest in parts of the northwest, mid-west, and southern United States. It is also sometimes referred to as the "black beetle" or a "water bug" because of its dark black appearance and tendency to harbor in damp locations.

Identification
The oriental cockroach flightless, approximately 1 inch long, and colored dark brown to black. Males have wings covering 3/4 of their body, and the female has very short  wings. The inner wing folds like a fan and is membranous whereas the outer part of the wing is narrow, leathery, and thick. The styli between a pair of jointed cerci can identify the male.

Life Cycle
A female oriental cockroach produces an average of eight egg capsules per lifetime. Each egg capsule, an ootheca, contains about 16 eggs that are lined up vertically, two by two in the egg case. The egg capsule may be carried from 12 hours to five days and then deposited in a warm sheltered environment where food is readily available. The incubation period for the oriental cockroach is about 42 to 81 days. When born, the female gives no assistance to the young nymphs who then go through seven molts before becoming adults; this process takes approximately one year. An adult can live from 34 to 180 days, and pairing takes place at any season.

Detection
Any area that has a high humidity and a cool temperature should be examined. Crawl spaces, basements, and kitchen and bathroom plumbing can be inspected for dead roaches, egg cases, and fecal smears. Also, any spider webs in these locations can be inspected for cockroach remains.

Habits and Habitat
This cockroach is common outdoors and lives in warm, damp, shady areas near the ground or other area containing natural debris. It will often seek refuge indoors when a drop in temperature occurs, even though it is quite tolerable of cooler weather. The most common areas to find an oriental roach include: basements, crawl spaces, areas between the soil and foundation, underneath sidewalks, in sewer pipes, in floor drains, under sinks, or any other damp cool area in the house. The roach travels through the structure on plumbing pipes and outside the house, they sometimes aggregate near or under garbage cans. The species tends to be seasonal, with adults appearing in spring and summer. When large numbers of roaches occur, overcrowding can lead to the mass migration of roach species.