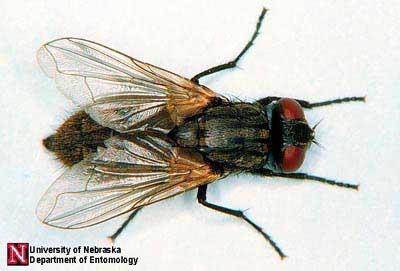 Appearance
Adults are about 1/6 to 1/4 inch long with reddish-brown eyes. Females are usually larger than males and have wider spacing between the eyes. They have two membranous wings that allow them a flight range from 2 to 20 miles, sponging or non-biting mouthparts, a dull gray body, and four narrow, black-lengthwise stripes on the thorax.

Life Cycle
Each female, during her three to four weeks of life, lays five to six batches of 75 to 100 small, white, oval eggs, largely in scattered garbage, that hatch in 12 to 24 hours into creamy white larvae. Larvae grow and pupate in four to seven days, and the last larval skin, which is hard and dark brown, is called a puparium. This stage lasts seven days, and can be the overwintering stage. The life cycle from egg to adult may be from 8 to 12 days in warm weather. A pair of flies beginning operation in April, if all were to live, would result in 191,010,000,000,000,000,000 (191 quintillion 10 quadrillion) flies by August. Allowing 1/8 cubic inch to a fly, this number would cover the earth 47 feet deep. Luckily, predators, parasites and other factors reduce fly populations.

Habitat
When feeding, house flies regurgitate some of their stomach contents on the food, which dissolves it. Then they suck it back into their stomach. They leave fecal deposits where they have walked. While walking and feeding on garbage, fecal material and food, flies may transfer disease organisms from both inside and outside their bodies.