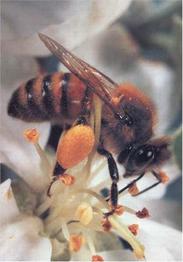 Honey bees are important pollinators in agricultural, urban, and natural landscapes. Bees pollinate about 130 fruit, vegetable, nut, ornamental, and fiber crops in the US contributing about $15 billion annually through improved crop yield and product quality. Hundreds of millions of dollars are additionally generated through the sale of hive products such as honey, wax, pollen, propolis, royal jelly, and venom.

Biology
Honey bees live in social units called colonies. A honey bee colony consists of a single queen, who is usually the mother of all other colony members, 10,000 - 30,000 semi-sterile female workers and up to a few thousand males (also called drones) depending on the time of year. The immature forms are collectively referred to as brood and include eggs, larvae, and pupae. Adult workers perform all of the behavioral tasks associated with colony living. Worker honey bees perform different tasks as they age, a phenomenon called temporal polyethism. When bees emerge from their cells as adults they normally clean cells, then as they age they feed larvae (nursing behavior), process and store food, secrete wax and construct comb, and guard the entrance. The most pronounced change in behavior occurs when bees are about three weeks old when they begin foraging. At this time, they cease performing most tasks within the nest and usually remain foragers for the rest of their lives. This age progression is not rigid and many factors such as genotype, colony social structure, foraging environment, time of year, and pheromones affect developmental rates and trajectories.

Colonies reproduce through a process of colony budding, commonly referred to as swarming. As colonies grow to swarming size, factors that inhibit queen rearing are released and new queens are reared in the presence of the old queen. Ordinarily, but not necessarily, the old queen leaves the nest with a group of bees to initiate a new nest. A daughter queen inherits the valuable parental nest and any remaining adults. In feral, unmanaged colonies, swarming-related queen rearing begins when colony size is about 12,000 workers and colonies may swarm when there are about 20,000 workers. Adult population size at swarming is highly variable and not the singular determinant for swarming. Other factors such as time of year, adult age distribution, and foraging environment also affect the timing of swarming. In temperate climates swarming usually takes place in the spring. In tropical and sub-tropical climates swarming may take place any time of year.

Habitat
Bees in temperate climates must be able to store large amounts of honey to survive the winter and maintain a colony size large enough to maintain the temperature of a winter cluster (interior minimum of about 13º C ). To generate the metabolic heat to do this bees consume honey. Therefore, temperate adapted bee survival depends on a relatively large nest, inside a well-insulated cavity. Temperate adapted bees need to swarm early enough in the spring to have sufficient time for the swarm and the parent colony to store enough honey for the next winter. This is likely why temperate bees swarm as large colonies and at a lower rate.

In contrast, tropically adapted bees do not experience prolonged periods of cold. They do not require a large, well-insulated nest cavity, a large colony size, or a large store of honey. In the tropics, swarming is dependent on cycles of resource abundance rather than seasons of cold and warm.