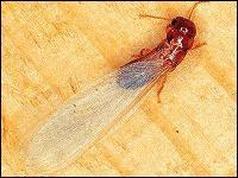 Drywood and subterranean termites are the most destructive pests of wood, causing more than $1.7 billion in damages and cost of control each year in the U.S. alone. Generally, the first indirect sign of infestation is fecal pellets or the presence of alates on windowsills or near lights. Alates are the winged form of a termite, also commonly called a swarmer. If they are found inside a home with closed windows and doors, this can be an indication of infestation within the structure. Another indication is the presence of discarded wings near emergence sites, on windowsills, or caught up in cobwebs. However, the presence of alates outdoors is a natural phenomenon and is not a direct sign that your home is infested with termites.

Identification
It is a common misconception that size of the worker will indicate whether the termite is a drywood or subterranean. While many drywood species have larger workers than do subterranean termites, other drywood species have much smaller workers. Soldiers of drywood termites will be larger than the workers, with brownish heads and large, toothed mandibles.

Fecal pellets are distinctive and used for identification of drywood termite infestation. Drywood fecal pellets are dry, smooth, hard, powderlylooking, elongated and less than 1/25 inch long. Typically the pellets are a light tan in color with some black ones mixed in. They have rounded ends and six flattened or concavely depressed sides with ridges at angles between the six surfaces. The characteristic shape results when the termite exerts pressure on the fecal material to extract and conserve moisture in its hindgut. Since these termites live within their food, they must find ways to remove waste from the colonized area. These termites make small holes, kickholes, to kick out fecal pellets (frass). Piles of the pellets usually accumulate under these openings.

Habitat
As the name implies, drywood termites establish in dry, sound wood that may have as little as 3 percent moisture content. Dead trees, branches, brush, and firewood from residential areas are the primary habitat of drywood termites. When land is cleared and houses or other buildings constructed, these structures are then subject to attack. These termites enter structures through attic or foundation vents, directly through or under wood shingles, under eaves and fascia boards, and through natural cracks, checks and joints in exposed wood trim, window and door frames and sills. Drywood alates can penetrate flat wood surfaces, but prefer to wedge themselves into narrow places to begin tunneling. Since there are drywood termites that nest in wooden framing, studs of homes, or in commodities such as wooden furniture, they can be widely distributed by people who unknowingly transport infested furniture. As a result, many pest termites have very wide distributions.

Life Cycle
Drywood termites form colonies in a similar manner to other termites and after the colony has matured, alates that fly out in great numbers at certain times of the year to set up new colonies. This process, known as swarming, generally occurs at dusk or during the night, and these winged termites tend to fly towards areas of greatest light intensity, gathering around lights and illuminated windows. Alates in a swarm will find mates to set up their new colony with and unlike the subterranean termites they form colonies within the wood itself rather than in the soil below. Since drywood termites form colonies within sound dead wood, they have no access to free water hence their name. They acquire water through metabolism of wood or through moisture in their environment. The maximum size of a colony depends on factors such as location, food availability, and environmental conditions. Most colonies remain small, but multiple colonies in the same piece of wood may contain up to 10,000 individuals. Only a small number of the swarmers survive to develop colonies. The majority fall prey to birds, toads, reptiles, insects, and other predators. Many others die from dehydration or injury.

Some termite species are very regular down to the time and day of year that nuptial flights are made. Other species vary widely on the day and time. Certain environmental conditions, such as heat, light, rainfall and moisture conditions, wind, atmospheric pressure and the electrical properties of the atmosphere trigger the emergence of alates, and each species has a definite set of conditions under which swarming will occur. The number of alates produced will be proportionate to the age and size of the colony, while environmental conditions regulate the number of swarms emerging from the colony. The bulk of a colonies alates will be released in one or two synchronized swarms then a few at a time are released throughout the rest of the season. Swarming constitutes a dispersal stage, rather than a true mating flight. Even though they are extremely weak flyers, individuals can travel great distances by being carried on air currents. Any alates that try to return from the outside are usually killed by soldiers congregating around colony openings.

Diet
Drywood termites derive their nutrition from cellulose in wood. Within the termite's gut are large numbers of bacteria and single-celled animals called protozoa. The protozoa produce enzymes that digest cellulose causing the break down of wood particles to simpler compounds that termites can absorb as food. They tend to cut across wood grain destroying both the soft spring wood and the harder summer growth. In nature, termites function as decomposers that breakdown dead wood that accumulates in and on the soil and the beneficial products of this breakdown process are returned to the soil as humus.

Reproduction
The alates, also called swarmers, are the termites responsible for producing offspring. These primary reproductives vary in body color from dark brown to light yellowish tan and are about 7/16 inches long including the wings. Their wings may be almost clear to smoke gray and have few distinct veins in them. If the primary reproductives die, they are replaced by immatures that can become capable of reproductive activity. They are known as replacement or secondary reproductives.

Although you may choose to make the inspection yourself, we recommend you have a professional pest control company that has the experience of detecting termite infestations you may otherwise overlook.