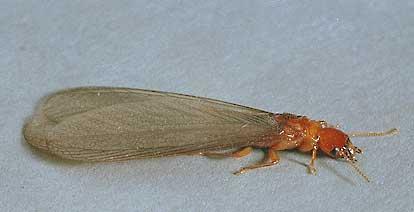 Generally, the first indirect sign of infestation is fecal pellets or the presence of alates on windowsills or near lights. Alates are the winged form of a termite, also commonly called a swarmer. If they are found inside a home with closed windows and doors, this can be an indication of infestation within the structure. Another indication is the presence of discarded wings near emergence sites, on windowsills, or caught up in cobwebs. However, the presence of alates outdoors is a natural phenomenon and is not a direct sign that your home is infested with termites.

Identification
Winged reproductive dampwood termites, also called swarmers, are dark brown with brown wings and are about 3/4 inches long. Soldiers have a flattened brown or yellowish brown head with elongated black or dark brown mandibles and constitute about 5% of the colony population. Young dampwood termites, nymphs, are cream colored with a characteristic spotted abdominal pattern caused by food in their intestines.

These termites can also be identified by their distinctive fecal pellets that are rounded at both ends, elongate, and lack the clear longitudinal ridges common to drywood termite pellets. Final confirmation of pellet identification may require help from a professional.

Habitat
Dampwood termites nest in wood buried in the ground, damp and decaying timber, wood with high moisture content, dead trees, crevices in damp logs or untreated fence posts, pruning scars, tree holes, stumps, and dead limbs of living standing trees. Note, though, that contact with the ground is not necessary when infested wood is high in moisture. Because of their high moisture requirements, dampwood termites are most often are found in cool, humid areas along the coast and are typical pests of beach houses. Winged reproductives, swarmers, are usually found swarming between July and October, but it is not unusual to see them at other times of the year.

Practices
Flights occur at dusk or at night. Dampwood termites are relatively strong fliers and, like most nocturnal flying insects, are attracted to lights. Porch lights, indoor lights, and video monitors often lure them inside, especially when doors and unscreened windows are opened. When they are found indoors, their origin is usually from a yard tree or a woodland colony. Occasionally, they are from an infestation in the structure itself. However, once indoors, these alates (winged termites) are doomed because they need moist wood for sucessful colonization.

Dampwood termites attack wood directly and usually do not burrow in soil. Although you may choose to make the inspection yourself, we recommend you have a professional pest control company that has the experience of detecting termite infestations you may otherwise overlook.

Reproduction and Life Cycle
A female dampwood termite assumes a "calling" position and releases a chemical messenger also called a pheromone which attracts nearby males. The pair shed their wings and find a suitable site for a colony. Once they find their site, they seal the entrance with fecal secreation and begin mating. A few weeks after mating, the queen lays her first batch of eggs. The eggs hatch and the first brood of larvae develop; they are cared for by both the male and female. Over the first few years, additional batches of eggs are laid and the first soldiers appear. After a few more years, the colony population numbers in the hundreds and the first crop of alates molt and the colony begins its first dispersal cycle.

Colonies of dampwood termites consist of three primary groups: the reproductives (king, queen, and unmated winged forms called alates), soldiers, and false workers also called pseudergates. Pseudergates are immature forms of dampwood termites that do not have any external signs of wings. When wing buds become visible after molting, they are called nymphs. The pseudergates and nymphs excavate and feed on wood to nourish themselves and their nestmates. These eggs and newly hatched termites, larvae, are usually found near the king and queen. Over time, dampwood termite colony populations can reach several thousand individuals and gallery systems may extend many meters into the wood.

Although you may choose to make the inspection yourself, we recommend you have a professional pest control company that has the experience of detecting termite infestations you may otherwise overlook.