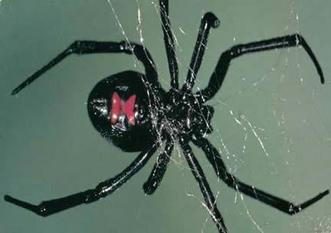 The black widow spider has a potent neurotoxic venom and is considered the most venomous spider in North America. However, the female injects such a small dose of venom that it rarely causes death. Reports indicate human mortality at well less than 1% from black widow spider bites.

Identification
The adult female black widow spider has a shiny, jet black, spherical abdomen with two connected red triangles on the underside that form a characteristic hourglass marking. Note, however, that the hourglass color may range from yellowish to various shades of orange or red. Adult females are about 1/2-inch long, not including the legs (about 1-1/2 inches when legs are spread). Adult female northern black widow spiders are shiny black or brown-black with a row of red spots on the top of the abdomen along the midline. Two reddish triangles resembling a split hourglass are present on the underside of the abdomen. Adult males are harmless, about half the female’s size, with smaller bodies and longer legs. The male’s abdomen usually has red spots along the upper midline and white lines or bars radiating out to the sides. Newly hatched spiderlings are predominately white or yellowish-white, gradually acquiring more black and varying amounts of red and white with each molt. Juveniles of both sexes resemble the male and are harmless.

Habit
These spiders are mostly likely to be located near wood piles, under eaves, in boxes, in outdoor toilets, meter boxes, and other unbothered places. The black widow spider is a cobweb builder whose silk is very strong. The female constructs a web, usually one foot in diameter, of crisscrossed silk threads with no recognizable pattern and with a dense area of silk, usually to one side, that serves as the spider’s daytime retreat. At night, the female hangs belly upward in the center of the web. She does not leave her hidden web voluntarily. This web serves to trap the spider’s food.

Diet
Their diet usually consists of a variety of insects such as cockroaches, beetles, and other arthropods. They are also know to eat flies, moths, crickets, small reptiles, and other small animals

Bite Symptoms
The severity of the reaction to a black widow spider depends on the area of the body bitten, amount of venom injected, and the person's sensitivity to the venom. The venom travels in the bloodstream throughout the body and acts on the nervous system, causing varying degrees of pain. Some people report very intense pain. There typically is no necrosis (sloughing) of tissues and no conspicuous swelling. The bite of a black widow spider initially may go unnoticed, but some people report a short stabbing pain. There may be slight local swelling and two faint red spots - puncture points from the fangs. Pain begins quickly and progresses from the bite site to the abdomen and back. Severe cramping or rigidity may occur in the abdominal muscles. Other symptoms may include nausea, profuse perspiration, tremors, labored breathing, restlessness, increased blood pressure, and fever. Symptoms often diminish after a day or so and cease after several days. Serious long-term complications or death are very rare.

First Aid
If bitten, remain calm, and immediately seek medical attention. Apply an ice pack directly to the bite area to relieve swelling and pain. Collect the spider, even if the spider is mangled, for positive identification. A plastic bag, small jar, or pill vial is useful and no preservative is necessary but rubbing alcohol helps to preserve the spider. A hospital stay may be recommended, particularly for those with a heart condition or with health problems, but a physician may administer medication to counteract the venom and relieve the pain.