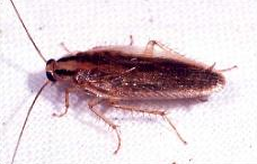 History
The Asian cockroach was identified as a newly introduced species in 1986, when a heavy infestation was found in Lakeland, Florida (Polk County). A second, more heavily infested area was identified in 1987 near Brandon and Tampa (Hillsborough County). Today, the Asian cockroach has spread to infest the southeastern United States. This cockroach is a rural and suburban pest that mainly infests single-family, suburban houses and yards. It is abundant outdoors, where populations of 30,000 to 250,000 per acre have been found. The adults are strong fliers and readily enter the houses.

Habits
The Asian cockroach is a strong flier, and is both a feral (wild) and peridomestic species. Adults take flight even during the day if disturbed and are readily seen in an infested lawn, because their flight is similar to that of moths and leafhoppers. At dusk there is a frenzy of activity; adults are very active in the grass and mulch climbing to the tips of grass and leaves to take flight. They are attracted to light-colored surfaces or brightly lit surfaces, where they alight. Numerous adults have been seen at all heights on single- and two-story homes. These cockroaches will invade any opening in a house, such as a lighted doorway or window. Once inside, they will crawl on an illuminated television screen and on walls while the lights are on during the evening. Because the peak activity period of Asian roaches coincides with our leisure time, the presence of the cockroach is obvious.

Biology
The female Asian cockroach produces an egg capsule that has about 40 eggs. It is carried by the female until the young are ready to hatch. The nymphs mature to adults in about 6 to 7 weeks. From late May through early August, nymphs predominate and adults are rarely encountered. However, adults are abundant during the early spring months (February through May) and again in mid-August to October.

Diet
The feeding behavior of the Asian cockroach appears to be similar to other cockroaches, in that they are omnivorous. Thus, they may be capable of carrying the same pathogenic organisms as the other peridomestic and domestic species of cockroaches. Considering their ability to produce large populations and their likelihood of entering homes, pathogens associated with animal droppings and soil microorganisms will be carried by this cockroach when it enters the home. People sensitive to allergens of German cockroaches are also sensitive to allergens of Asian cockroaches.